MIPS APMs May Catch Many Practices Off Guard

This article discusses how a large percentage of clinicians eligible for MIPS will receive MIPS Scores in 2017 and 2018 based on what are called “MIPS APMs” that use a distinctly different scoring methodology than the MIPS, referred to as the APM Scoring Standard.  This article discusses the implications of being in a MIPS APM on your final MIPS score and importantly your reporting obligations.

Any clinician that meets the following three criteria will have their MIPS score determined by the MIPS APM scoring methodology. This includes clinicians that meet the following criteria:

Why is this important?

For example, all clinicians that participate in Alternative Payment Models such as a Medicare Shared Savings Program (MSSP) Accountable Care Organization-Track 1 will have their MIPS score determined by the MIPS APM scoring standard.  This is anticipated to affect a large number of clinicians in 2017 and 2018.  These practices do not need to independently report any MIPS data other than their use of electronic health records through the Advancing Care Information performance category of MIPS.

All participants in a MIPS APM entity, such as a Track 1 MSSP ACO, will receive the same MIPS score. This score will:

The APM scoring standard that is used depends on the type of APM entity. There are two general categories. The first method applies to MIPS eligible clinicians participating in Medicare Shared Savings Program (MSSP) ACOs, including all Track 1 participants and those participating in Track 2 and Track 3 ACO’s that do not meet the requirements to be Qualifying Participants in and Advanced APM.

In this type of MIPS APM the performance categories have the following weightings:

As noted above, individual practices have no reporting requirement for quality measures, this is the responsibility of the ACO.  However, they do need to independently report their ACI performance scores.

In this type of MIPS APM, i.e. MSSP ACO’s, the average ACI performance score from each participant in the ACO is averaged together to determine the ACI score for the entire MIPS APM entity.

In general, CMS will credit the MIPS APM entity with the full 20 points from the improvement activity category.  There is no reporting requirement at the practice level.

Alternative Payment Models that are not MSSP ACO’s use different scoring metrics. In the 2017 performance year quality will not be used to determine the MIPS score for these entities. Non-ACO APMs include the Oncology Care Model, the End Stage Renal Disease Care Model, Comprehensive Primary Care +, and the Next Generation ACO Model.

For example, clinicians that participate in one of these APMs in the qualify to be in a MIPS APM entity will have their score based on the following weightings in 2017:

Based on projections, this would qualify the practice for a small positive payment adjustment of approximately 1 to 2%. This would be applied to all Part B Medicare claim reimbursement in the 2019 calendar year.

MIPS APMs are one of the more challenging areas of the MACRA legislation and subsequent CMS guidance to interpret.  We are available to help you navigate through MACRA.  For additional information and support please contact us at info@apollohit.com . 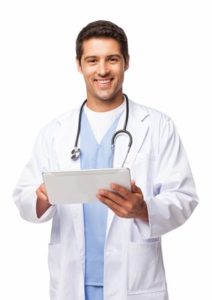